New robot does 'the worm' when temperature changes

DNVN - A new gelatinous robot that can crawl, powered solely by temperature change and clever design, adds "a sort of intelligence" to the field of soft robotics.

David Gracias, a professor of chemical and biomolecular engineering at Johns Hopkins University and the study's senior author, remarked, "It seems very simple, but this object moves without batteries, wiring, or any other external power source, relying only on the swelling and shrinking of gel." "Our research demonstrates how manipulating the shape, dimensions, and patterning of gels can be used to imbue morphology with a type of intelligence for locomotion."

Robots are almost exclusively made of hard materials such as metals and plastics, which is a fundamental barrier to the development of humanoid robots and robots ideal for human biomedical advancements. 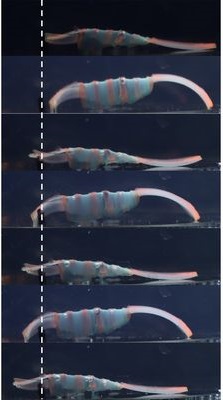 New robot does 'the worm' when temperature changes.

The water-based gels that have the consistency of gummy bears are among the most promising materials in the field of soft robotics. Researchers have previously demonstrated that temperature-responsive gels can be used to create intelligent structures. Here, the Johns Hopkins team demonstrated for the first time how the expansion and contraction of gels can be used to move robots forward and backward on flat surfaces, or to have them crawl in specific directions with a wavelike motion.

The 3D-printed gelbots developed for this study would be simple to mass-produce. Gracias foresees a variety of practical future applications, including the transport of targeted medications on surfaces through the human body. They could also be marine robots that patrol and monitor the surface of the ocean.

Gracias hopes to train the gelbots to crawl in response to variations in biomarkers and biochemicals found in humans. He also plans to test other shapes and forms inspired by worms and marine organisms and to incorporate cameras and sensors into their bodies.

The research was funded by the National Science Foundation (EFMA-1830893).